Our tiny house was built near Asheville, NC and then moved more than 100 miles to our land near Boone, NC. Honestly, the move was probably the most stressful part of our entire tiny house project! While it is possible to move a tiny house yourself, in many cases it is smart to hire a professional mover instead.

Read on to hear the story of our move and why we almost had to choose between selling our new tiny house or our mountain lot.

Why Use a Professional Mover?

You should consider a professional mover if any of these apply to you:

In our case, ALL of these applied, so the decision was easy!

Most tiny houses are only 8.5′ wide because anything wider typically requires filing a travel plan and obtaining a permit from the DOT for each state that you will be traveling through. The permits are around $80 per state, and while I hear the process is not that difficult, it’s one more thing a professional mover will take care of for you.

Our home was built on a 10×30′ trailer (11′ wide at the wheels). This was a conscious decision that allowed us to create an optimal floor plan that makes our tiny house feel, well, NOT so tiny! We weren’t concerned about the extra width because we don’t intend to move our home regularly like an RV, but we still retain the flexibility to move it should our needs change in the future.

Cost to Move a Tiny House

When you are working up your tiny house budget, be sure to set aside some funds to actually move the house. Moving costs can vary wildly depending on factors such as:

So there are no surprises, it’s best to talk to a professional mover up front to get a quote. You might budget around $2.5k on up to even $6k for a very challenging move and setup. That being said, short, straightforward moves can be less.

Our Challenging Route and Finding the Right Mover

To get to our mountain lot you must traverse a state-maintained gravel road with some very tight switchbacks, but the real challenges come beyond that on the narrow one-lane private mountain road complete with sheer drop-offs, tight turns, eroded areas, and giant boulders along the sides.

This challenging route was top of mind as we started designing our home, so we walked the road with a professional mover (one of three I ended up interviewing) to get his opinion on how large we could go. With his blessing, we settled on 10×30′ and started the build.

Months later, I called another meeting with mover #1 to walk the route again and flag any trees or large branches that could be problematic. That’s when he dropped the bomb that the much bigger problem was actually the narrow, eroded section of road between the sheer rock face and steep dropoff at the beginning of the private road. He now thought the job was impossible—mind you this is the same road we walked before—and by this point, our tiny house was well under construction on top of a custom-built trailer. I was NOT happy.

I met with a second mover, and he also felt the job was impossible unless I removed some rock or widened the road in this narrow section. We were pretty stressed out because we had already purchased the mountain lot of our dreams and were actively developing the land (adding utilities, clearing trees for the view, cutting a driveway, installing landscaping, etc.), not to mention we were under contract building our tiny house. So we were faced with either selling the lot, selling the house, or figuring out some other way to get the house down the road.

Again the house is 11′ wide at the wheels, and at the crux, the road is literally 11′ wide measured from rock to the delicate edge of the road above a 40 ft drop-off. I hired a civil engineer and looked into widening the road in this section, hammering out a few feet of the boulder, and even transporting the home with a heavy lift helicopter, but all of these options were very expensive. Frustrated, I decided to interview mover #3, Darrell Gaskins (a.k.a. Big D) of Gaskins Moving.

I nervously rode shotgun in Darrell’s truck as we reviewed the route, stopping frequently to measure perilous sections of the road. Darrell was quiet, and I could tell he was thinking hard if he wanted to take on such a challenging job.

He was still unsure after we arrived at the lot, explaining that the reverse trip might reveal new information. Seriously, could the suspense last any longer? After driving the road in the other direction, we finally we reached the moment of truth. I think I was holding my breath when Darell said he could do it! I was very relieved but still nervous right up to the day of the move.

As the house was being finished up, we prepared for the move. Our tiny house has a higher value than the mobile homes that Darrell typically moves, so I made sure he got an additional insurance rider to cover the house in case of a total loss. He planned and filed his route with the DOT, and I hired a crew to trim branches along the private road. The builder secured the sliding doors and loose objects in the house, including a 2ft roof awning that we’d install onsite. Then it was just a waiting game until we had a stretch of dry weather that aligned with our schedules.

The original plan was to pull the house with a semi-truck along major roads and the state-maintained gravel road until we could reach a wide area at the end before the problematic one-lane private road. This staging area is where Darrell’s crew would replace the semi with a “House Cat” remote control tractor and temporarily replace the three trailer axles with a remote controlled “JAAD” machine. The JAAD can be steered and tilted to precisely position the home and has an extra set of metal rollers underneath it set inward from its tires. This would prove critical in the narrow section where placing the full weight of the home on the edge of the road would cause a disastrous collapse. 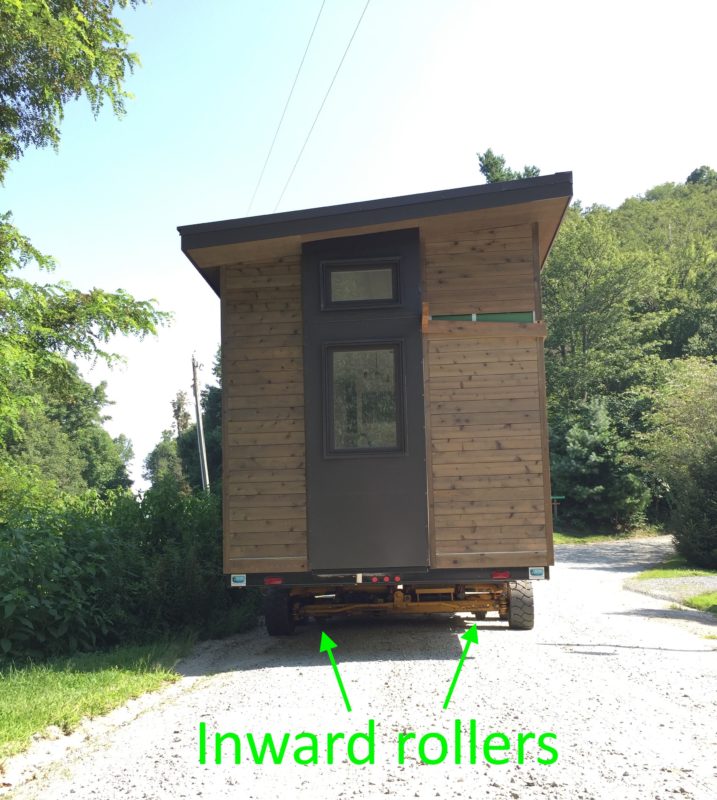 After almost not starting due to the threat of rain, I nervously drove the two hours from Charlotte to meet Darrell. Upon arrival, I immediately knew something was up. They were replacing the trailer axles with the JAAD machine on the side of the highway, not a mile farther down the gravel road as planned. The first switchback on the road was so sharp that two of the trailer tires blew out! We also discovered that due to the way the trailer was built, the JAAD machine’s turning radius would not be as tight as when moving a mobile home. Ugh. It was at this point we were questioning whether the job was even possible, and I told Darrell there was no plan B (no pressure, ha!)

Around 5 pm, we finally reached the staging area where the crew hooked up the House Cat. They had worked through lunch, so I drove into town to get them some sandwiches while they took a break (or so I thought). When I got back, they were 20 feet past the crux! I’m sure Darrell appreciated the reprieve from a nervous owner breathing down his neck and took the opportunity to focus on directing his crew through the most difficult stretch. I seriously could not believe it! There were more challenges ahead, but I breathed a huge sigh of relief. It was looking like our dream of a tiny mountain house was about to come true.

For the rest of the journey, there was a lookout on each house corner providing feedback while Darrell controlled the House Cat and another man controlled the JAAD machine. I walked in front of them clearing remaining brush with a machete and pointing out any large branches for the crew to cut with a pole saw. At one point I got attacked by a swarm of bees, ouch!

It was a pretty sweet feeling when the house pulled down the driveway and came to rest on the house pad. Keep in mind that there was no experienced land developer that helped us figure out the precise placement of utilities, the house corner locations, the driveway, what trees to clear for the view, etc., rather it was just us staking things out for our grading contractor using our best judgment. So you can imagine my relief seeing it all come together successfully!

Darell’s crew leveled the house, placed it on blocks, and strapped it down with six auger-style earth anchors. And with that, they were on their way. Later I installed the plumbing system (drain lines) under the house and hooked it up to utilities, and our (future) deck contractor attached the pre-fabricated 2ft wide roof awning over the front door.

I want to be clear that we had a very challenging, atypical situation, and I am not trying to scare anyone with our story. However, I do hope I’ve communicated the value of a professional mover and at least given you some things to consider with your own move, even if you go it alone. And if you are in need of help, I highly recommend Gaskins Moving. Darrell’s catchphrase is “I’ll move it!,” and I’m his new biggest fan 🙂